How We Started and Where We’re Going

Ken Carter, founder and owner of Carter Fence Company, moved to Naples in the 1980s. The then-sleepy town was home to his grandparents, whom he came to live near after the loss of his parents. A native of Cleveland, Ohio, Ken always enjoyed being outdoors, and searched for a job that would allow him to work in the open air. He found that opportunity with Coastal Fence & Wire, which encouraged him to start his own fence company. Having a business degree in Management and Finance from Ohio University, he considered the benefits of not being fenced in working for someone else. In 1989, Ken Carter Fence & Wire was assembled! Ken excitedly began passing out flyers in Golden Gate City, and joined up with Frank Shropfer, who is still with the company today. Though Naples was not the destination it is nowadays, the duo was able to make a name for themselves and grow along with this beautiful town.

The impact of Hurricane Charley in 2004 prompted the company to move from rented storage units in Golden Gate City to a temporary home-based warehouse for efficiency in meeting demand. The move was accompanied by a name change: Carter Fence Company, Inc. With more employees, more deliveries and more permitting requirements than ever before, it was quickly realized that an industrial location was where they needed to be. Today they operate out of White Lake Industrial Park, with a recent expansion to an additional warehouse down the road from the flagship location where the custom fabrication, access control and construction fence divisions are ran out of. This location is ideal for service to all of their SWFL customers. Additional recent growth opportunities have Carter Fence Company looking forward to expansion in Charlotte County as well.

Ken’s keys to success are not just because of the rigorous work that is inherent to his industry, or to the superb customer service they provide. While fencing does involve arduous labor, it really comes down to the team, he explains. “Throughout thirty years of business, Carter Fence has been able to grow with some truly amazing people. Carter Fence is a family-oriented company, which is something that we will never change. Caring about each individual’s family is what we believe has gotten us this far. We want our employees to feel like they are part of the company and its success. We want to see our employees better themselves and their family’s lives.” With team leaders that have been around as long as 25 years, it’s clear that this philosophy works. 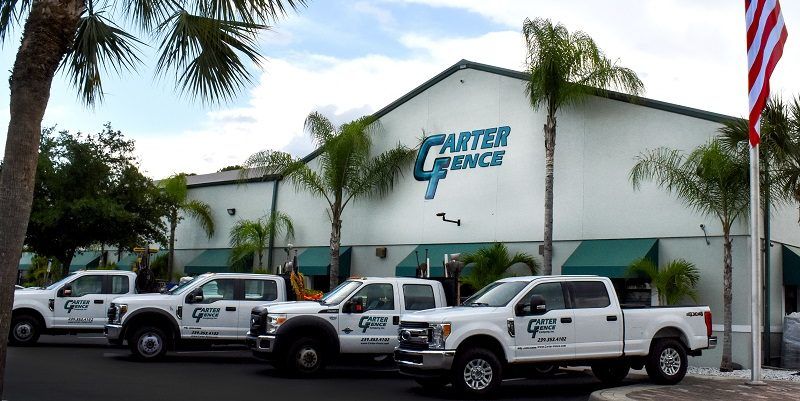 There are no boundaries for the future of this fencing company! Carter Fence Company is building relationships with contractors all over Florida, with their sights on expansion up the coast to Tampa, across to Orlando and down the East Coast. Their dedicated divisions include: commercial acquisitions and installations, custom fabrications, access control and construction fence. “We are a turnkey fence contractor. We handle everything from estimating, permitting, ordering materials and installing the product. We have a variety of different departments within our company, which can provide you with everything you need for accurate security and privacy at home or work. We are your one stop shop for ALL your fencing needs!”

Ken Carter believes it is imperative that his company stays true to their remarkable reputation. He likes to say that, “Quality comes at a cost, and we are a quality fence company.” To find out more about this company, please visit their website at www.Carter-Fence.com. There, you will find galleries of their workmanship along with a link to receive your estimate. You can also visit their Facebook or Instagram page @carterfenceco to receive even more updates on all that’s happening. From Collier County to Charlotte County, their custom gate and fence work is always pristine.

“View Our Facility and Learn More about Carter Fence Company”

We Have You Covered

Get Your Free Quote